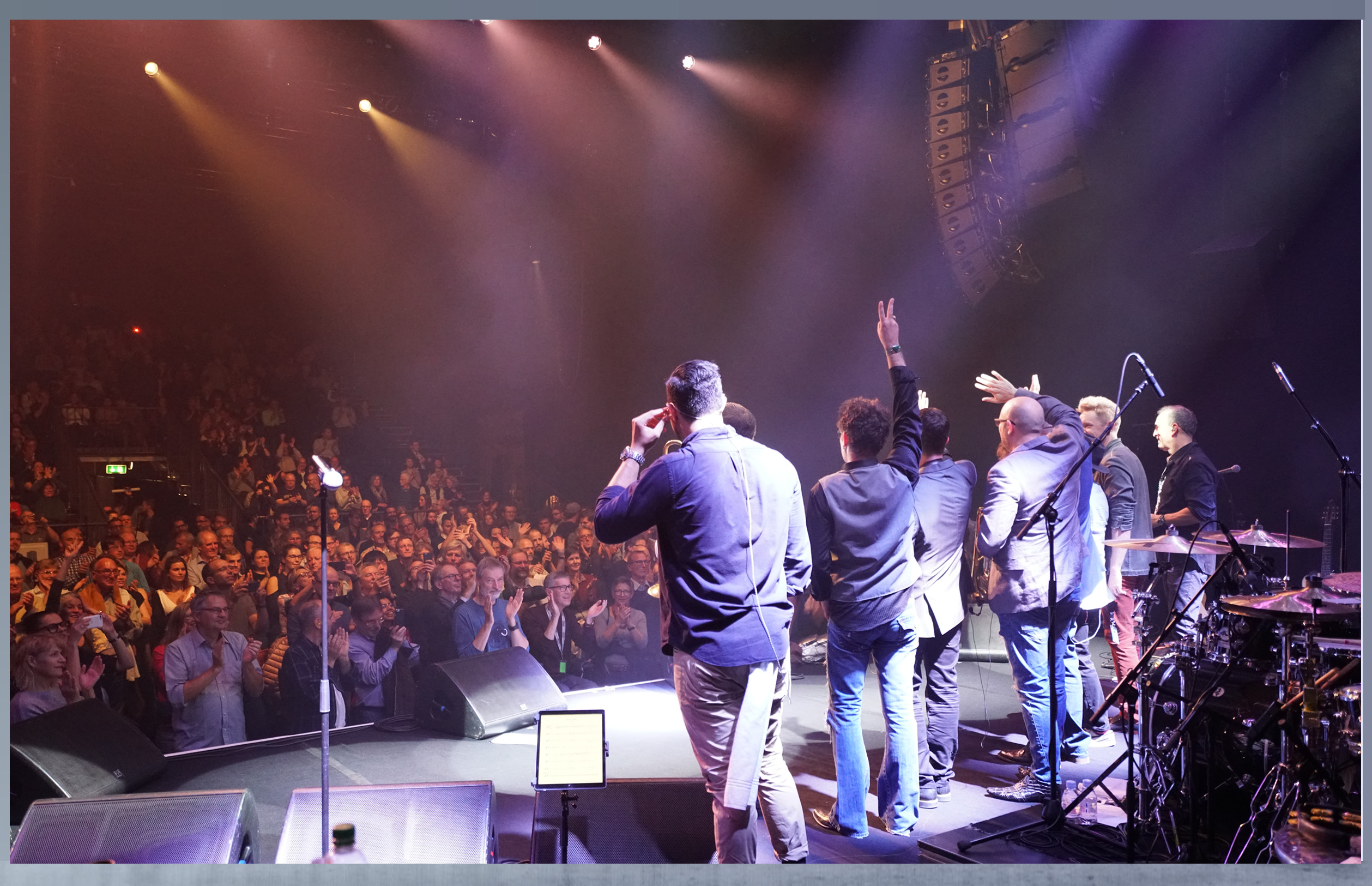 Blood, Sweat and Tears LIVE! at the Newton Theatre

The lights in the theatre dim and the members of Blood, Sweat and Tears hit the stage running with a powerhouse version of the Blood, Sweat & Tears album cut, “More and More.” With his powerful voice, Paluso sings, “That’s why my love for you/Keeps on growin’/More and more/All the time.”

This year was the 10th Anniversary and the headliner was BS&T. The band was amazing and we had the largest audience that we have ever had and they did not want the band to stop after the encore.This show was recent Voice finalist, Keith Paluso’s first show with the band and he was a perfect fit from his vocals and showmanship.

There was more music in that room in twenty minutes than has been there all year long.

The audience never sat down. To add to the amazement …we are in rural Harrington Delaware which is typically country, country rock… even Disco territory and the audience is applauding solos with series of 32nd notes…this was jazz as God intended it to be…I am so blessed to be able to work occasionally with artist like BS&T.  Thank you Harold Smick (BS&T Prod.Mgr) for making the logistics “cake”.
April 2018
Bill Rezey
Fast Forward, Inc.

The crowd was singing & dancing during the entire show! The musicianship was of the highest level it was Beautiful. Thanks for being part of Riviera Maya Jazz Festival 14th 2016 Edition.

Hope to see you soon & We’ll keep in touch from now on. All the best always.

The musicianship and energy of the band is outstanding and a real treat for our audience.   Drummer Dylan Elise and bass player Ric Fierabracci comprised a rhythm section second to none, and the horn players were awesome individually and collectively.  The addition of lead vocalist Bo Bice puts the band over the top.  He has tons of charisma and a gift for making the audience part of the show, and his vocal prowess does justice to the band’s string of hit records.

Multi-generational crowds dancing and singing in the streets created a vibe that festival fans talked about for weeks!”

Blood, Sweat & Tears was a pleasure to work with.

It was easy to see that they had a great respect for the Symphony, and really seemed to understand the finesse that a Symphony show requires. The show was upbeat and fun and the audience loved it. It was a great mix of BS&T classics and a few well-chosen covers as well. I highly recommend this group.

Blood Sweat & Tears fills the stage with an incredibly gifted group of musicians.

These guys are NOT an oldies band! Keeping the audience on their feet with multiple standing ovations while faultlessly staying true to the BS&T  sounds that took their music around the world.  These guys are true professionals from the moment they arrive to their departure! They have performed multiple times at many of my venues.

The current ‘Blood Sweat and Tears’ is every bit worthy of the original band.

The legacy of top ten hits, and the groundbreaking jazz rock fusion arrangements that were their hallmark. Catch them wherever they are performing  — original and new fans alike will not be disappointed!

I do more than 150 shows at my venue and the Blood Sweat and Tears show was by far one of the best shows we’ve had all year.

It sold out, the crowd was loving it and the crew was great to deal with. This will definitely be an annual at The Ridgefield Playhouse!!

Blood Sweat & Tears always puts on a GREAT show and does great business for us.